Discover Venice with a local guide

An amazing walk through the streets of Venice is the best way to experience the history and traditions of the city. Accompanied by an expert local guide, you will visit the wonderful historical center of Venice: Piazza San Marco, Rialto, the Fenice, majestic palaces and secret places known only to Venetians.

Not just any Venetian, but a guide who still loves and studies theimmense heritagethat this city represents and will reveal to you how much our daily life owes to the city of Venice, where the first banks, the first insurance companies in the world were invented and…. A lot of other things you don’t expect.

You will discover the true history of St. Mark’s Square, the beating heart of the Republic of Venice for more than a thousand years. You will see with other eyes the Doge’s Palace from which the Venetian nobles were able to balance with skill and cunning wars and trade around the world past continuously enriching, over time, their Basilica of priceless treasures.

But Venice is not only Piazza San Marco, but rich palaces are scattered throughout the city, a discovery to be made

street after street to get to Campo San Giovanni e Paolo, the Pantheon of the heroes of the city of Venice surrounded by beautiful palaces in a magical romantic atmosphere crystallized in time.

Slowly with your Venetian guide we’ll get to Marco Polo’s house and the commercial heart of the city Rialto with its world famous bridge and the Fondaci, the legendary places created by the Republic of Venice to trade, the forerunners of our department stores.

Along the way you will admire the famous Teatro la Fenice (“the Phoenix Theater”), rebuilt several times following fires and 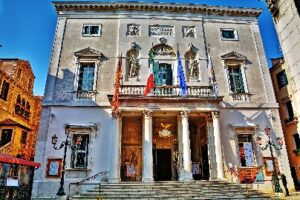 and whose name is linked to that of Giuseppe Verdi who, with his works full of patriotic sentiments, became a symbol in the fight against the Austrian power that dominated over Venice in the first half of the 19th century

A fun trip, even for families, to experience and discover the centuries-old history of Venice.